Promising wins for J13s
In the WJ13 Coxed Quads event the A Division boat of cox Izzy Petersen, Hannah Mills, Georgia Brown, Freya Jonsson and Hazel Drury and the B division quad of Cox Alex Kelly, Amber Weller, Phoebe Snowden, Jess Roberts and Freya Reid raced well. The A boat won their event crossing the line before Shiplake Vikings with an easy verdict having beaten a crew from Guildford in an earlier heat.  The WJ13 double of Freya Reid and Kitty Horne reached the semi-final against Reading where they lost out on a place in the final.

In the J13 coxed quads James Swinburn, Alex Carr, Euan Turnell and Grant Taylor coxed by Charles Washbourne reached the final after a finely executed race against Guildford. The boys sculled confidently down the 900m course in the final to win against another Guildford crew. Tom McLellan and Hugo Rumpali raced Walbrook whilst James Swinburn and Grant Taylor competed against Guildford in the J13 double sculls, but despite strong performances neither crew reached the final.

Strong performance and first 1x wins for J14s
WJ14 girls took to the water to compete across 2 division in their single sculls. Livia Petersen and Bobbi Miles raced against Burway and LEH respectively in the A division whilst Jessica Arlett, Sophia Hahn and Maya Andrews raced in the B division against Walton and two LEH crews in their heats. All 5 girls showed great determination in their races but only Hahn was to make the final where she took home gold after an excellent race against Poole of Walton.

Three WJ14 doubles were entered; Emma Gray rowing with Amelia Crick and Esther Morgan partnering Felicity Parfitt in the A Divison, whilst Hannah Webb and Ruby Borg raced in Division B. In Division A, Morgan and Parfitt reached the final having beaten two LEH crews in their heat and the semi, but unfortunately were pipped by Walton for the Gold.

The J14 boys raced in all three waves in singles, doubles and quads. The doubles of Joe Sidgwick and Oliver Taylor, and Sam Bell and Henry Peters were both beaten in their respective division semi-finals by the eventual winners. In the quads, the Henley boats raced each other in a hard-fought semi-final with the crew of Connor Brown, Joe Sidgwick, Tom Crook and Henry Peters with cox Joe Edwards prevailing over their club-mates Sam Bell, Balti Issa, Oliver Taylor and Jack Spiers with cox Charles Washbourne. The Henley crew then went on to win the final comfortably. 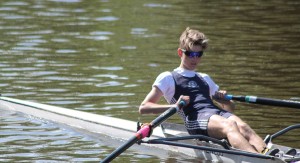 Connor, Tom and Jack went on to new territory, racing in single sculls for the first time. In his division, Tom was on the losing end of a race with a National Schools champion, while in the other division Jack and Connor raced each other in yet another all-Henley semi-final. Jack took victory and then in the final had a tight race, which he won by just half a length sculling around the outside of the bend.

Decisive WJ15/WJ16/Junior wins
Success was to be had across the girls singles events with Mary Wright winning the WJ15 Div A race and Lottie Orr winning the WJ15 Div B race. Wright and Orr were to meet in the final of the Women’s Novice event later in the day with Orr winning decisively by some lengths. Lauren Kay won her WJ16 singles final comfortably.

WJ15’s Grace Johnson and Georgie Robinson Ranger sculled beautifully down the course in their doubles final against hosts Weybridge and took Gold with a verdict of easily. The WJ16 double of Ella Morgan and Lily Stimpson won their heat easily and met Foulkes of Weybridge in the Final where they took a commanding lead from the start and crossed the line in first place. In the WIM3 doubles, Ella Morgan and Florence Wiggins cruised through their heat and met fellow Henley athletes Cat Kay and Lauren Kay in the final. After a re-start due to a capsize further down the course, Morgan and Wiggins took the lead to cross the line with a verdict of easily.