The biggest ever British Rowing Junior Championships, ended under a blaze of glorious sunshine as records fell across the three day competition. A record number of entries saw over 1,500 junior rowers from 131 clubs race over the course of the weekend, the biggest entry since the Junior Championships began. Henley Rowing Club had a very successful weekend returning with four gold, four silver, one bronze, and the victor ludorum for most successful club for a 2nd year running. In addition, four girls from the club were selected to represent England at the Home Countries International Regatta.

In the WJ18’s Georgia Edwards, Alicia Redman, Grace Johnson and Daisy Butterworth raced in the Junior Coxless fours. They won the qualifying time trial just ahead of Glasgow Academy. In the final, Glasgow and Henley led the rest of the field comfortably and the race was all about who would take silver and gold. In the closing stages Glasgow moved ahead to take the Gold. As the fastest English crew in the race Georgia, Alicia, Grace and Daisy get the honour of representing England in the Home International Regatta this weekend. They will be joined by Clare Pearson and Issy Johnson, who were selected from GB final trial to represent England in the coxed four and eight.

In WJ18 Quads, the very recently formed crew of Amy Sotnick, Rebecca Lister, Alice Jones, and Phyliss Barter, were second in the time trials and had a comfortable win in the semis. The final though was always going to be tough with the Gloucester crew containing three of the Henley Royal Regatta winning crew. Gloucester & Henley opened up clear water over the rest of the field early in the race, and these two crews were able to have a comfortable paddle into the finish with Henley (silver) never being challenged by the rest of the field but in turn never being able to challenge Gloucester, who went onto win Gold.

The quad and the four combined with Freya Reid to make up the Junior Eights. In the time trial, Henley finished in second place, 2 seconds behind Nottingham Rowing Association (previously Becket School). This was seven of Nottingham’s first eight that had finished third at the National Schools Regatta (NSR) and six of Henley’s second eight that had finished in sixth place at NSR. Nottingham where anticipating a win. Both crews won their respective semi-finals easily and where drawn in adjacent lanes for the final. Nottingham led from the start and with 750m gone, were three quarters of a length up, but from this point on the Henley eight started to reel them in. At halfway Nottingham still led but by a third of a length, with 500m to go Henley led by a canvas and continued to pull it out to win with clear water. 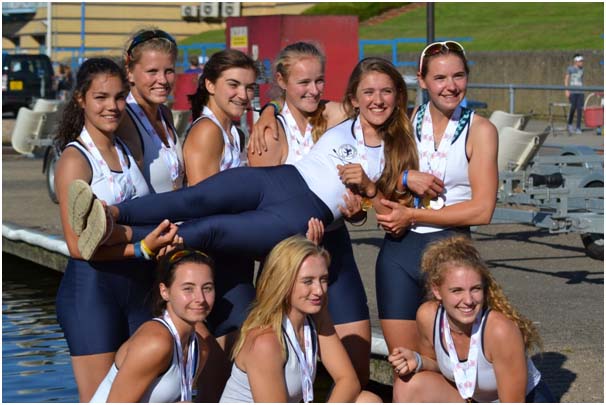 The WJ16 & J15’s were also racing at the championships and managed to get five of their six boats to the finals on Sunday. The first was the J16 quad of Amelia Crick, Phoebe Fletcher, Jess Arlett and Caoimhe O’Donohue, who after coming fourth in the Saturday time trial, couldn’t quite turn it into a medal position after reaching the final.

The J15 double sculls of Georgia Brown/Carla Russell and Hanna Hills/Hazel Drury sculled well in their time trial, to come 2nd & 4th in a field of 46. The Brown/Russell double took a very well fought gold, with Hills/Drury getting a very respectable 5th.

Last up was the J15 coxed quads of Georgia Brown, Amber Weller, Carla Russell, Hanna Hills and Freya Reid, along with, Jess Roberts, Amy Howard, Phoebe Snowden, Hazel Drury and Ella Nolson, who both made the final. In a very tough field, the Hills quad took gold after being pushed hard by Tideway Scullers and Maidenhead RC, with the Drury quad coming 6th. 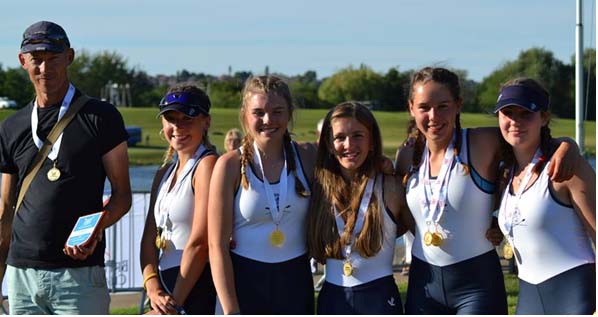 The Henley boys were also racing this weekend and succeeded in reaching four “A” finals, converting two of them into silver and bronze medals. The standout performance was from John Yolland, who in his first season of rowing reached the J16 A final in his single scull and whilst he didn’t medal, he managed a wonderful 4th place. The J16 double of Balti Issa and Ollie Taylor (still recovering from racing for GB at the annual GB/France match on Thursday) also made their A final and again made it to fourth place. The same story for two of the J15 quad who were rowing up at the GB/France match and in their final James Swinburn , Euan Turnell, Grant Taylor, Alex Carr and cox Charles Washbourn achieved a very creditable bronze medal in a tough race. 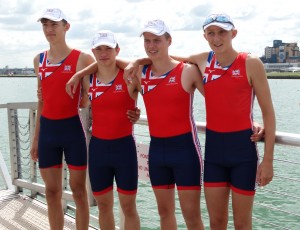 The J15 doubles final ended up as a local affair, with the Gold going to Leander with Ed Roy and Dan Crick winning a silver for Henley in an exciting photo finish with Peterborough. This was an especially impressive result as Dan Crick is a J14 and yet rowing as a J15 and this doubles partnership had not been rowing together for very long. All in all a very rewarding weekend for the town of Henley and a clear recognition of all the hard work that goes into making Henley Rowing Club the best junior club in the country. 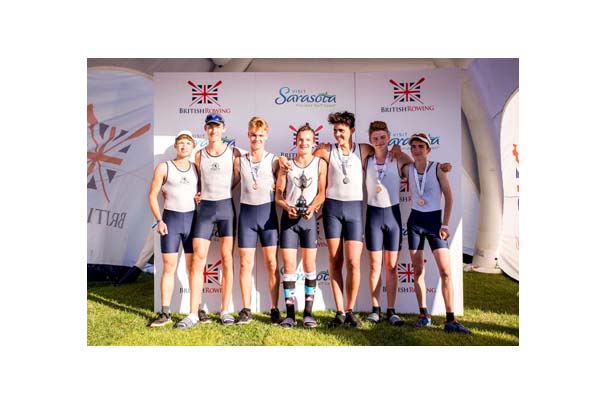