The AGM was held on 21st March 2018 at 8pm in the club bar room. Quorum was established and the meeting opened.

The Chairman reported that the current President Miriam Luke would be pleased to continue in the role which was approved unanimously by the members present. Unfortunately, the President sent apologies at short notice as she was not able to attend the meeting that evening for family reasons.

Congratulations to recipients of the Annual awards as follows: 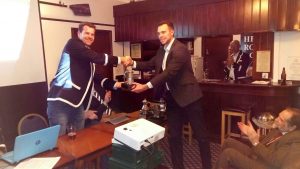 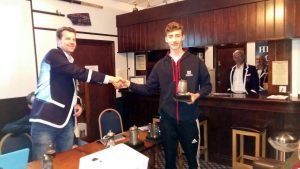 The following members were elected to the committee: Francis Goodwin, Nathan Hillier, David Mikoska, Helen Turnell. The Chairman noted that the recent committee elections would strengthen the present structure as this would enable deputies for the officer roles to be in place.

The Chairman and Captain presented an update on the Three Year Plan presented on 21 March 2017.

The recent pontoon purchase was noted as a highlight. It was hoped that these would be in place by early May subject to EA approval and necessary works to enable installation.  The Captain provided an outline of the proposed fleet purchase plan.  A proposal for re-development of the internal space to enhance facilities and improve training/changing room/toilet facilities was presented in outline.  Members would be encouraged to be part of a sub-group to work on the detailed proposal. A stretch target completion of December 2019 would be dependent on costings, planning etc.

A memo had been circulated to members by email dated 26th February 2018 with the notice of the AGM.  After discussion the proposed resolution in the Notice of meeting ie pursuing a change in the club’s legal status and recommending incorporating as a charitable company limited by guarantee, was approved.  The sub-committee would work on the detailed proposal for a future special general meeting of the club. It was hoped that it would be possible to do this at the Captain’s meeting proposed for 26th July 2018 with the aim to achieve incorporation for beginning of the new club accounting year from 1 September 2018.