After winning the Victor Ludorum at last week’s Upper Thames Autumn Head, Henley continued the run of form with no less than 13 wins at this weekend’s Henley Sculls event. This year the event, which is organised by the Henley Rowing Club itself, had over 540 entrants making it one of the biggest local 1 day events. This year the rowers also had chance to rub shoulders with double Olympic Gold Medallist James Cracknell OBE. James made his first return to sculling since 2003 and showed he still has the amazing talent that made him one of the UK’s most successful sportsman – winning the Masters C 1x.

James’s presence no doubt lifted the spirits of the many other competitors, families & parents who weathered the Baltic conditions to watch a great day of racing. One of the first to race was Henley’s Club Captain Stan Admiraal who won IM2 1x, beating a field of 15 boats and powering through to a 14sec lead over the second place finisher. He then jumped in a quad in the afternoon and helped push them to victory in IM2 4x-. The very successful WJ18 quads, also delivered x2 wins in the J18A and WIM3 with some of the crew members winning the J18A 2x. Having already competed in a winning quad, Helen Robinson-Ranger went on to win the J18A 1x and the overall prize of fastest girl in the whole event. 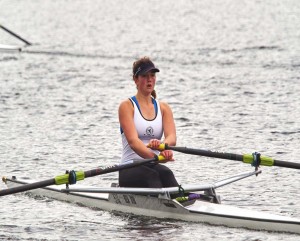 Following their success at the Upper Thames, the J15 first quad also secured another emphatic win against seven other crews, James Swinburn, Euan Turnell, Grant Taylor and Alex Carr with James Penrose coxing, dominated the race with a powerful display with the second J15 quad achieving sixth place and showing much improved technique from the crew of Sam Beattie, Charlie Garnham, David Rechner, James Wallace with Charles Washbourn coxing. James Swinburn also raced in a single and was one of nineteen scullers, he was narrowly beaten into second place by only two seconds by a sculler from Reading RC in a race where the lead was exchanged by both scullers on many occasions.

After their win at Reading Small Boats Head, Henley boys’ J16 4x- also put in another great performance. The crew of Connor Brown, Joe Sidgwick, Oliver Taylor, and Balthazar Issa won in a quality field, beating into second place the City of Bristol crew who were gold medallists at last summer’s National Schools Regatta. Bruce Turnell, shortly to take part in the GB Early ID Assessment for juniors over 5k in Boston, Lincs, put down a good marker by coming second in a huge field of 56 scullers in J18 1x.

Henley J16 girls also delivered some strong results. Sophia Hahn beat 21 other scullers in her single, with the second place being 29 secs behind. 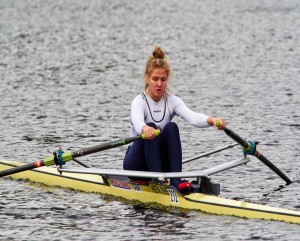 She then jumped into a double scull in the afternoon with Amelia Crick and triumphed over a field of six other competitors. The other J16 quads came 4th & 5th in a field of eleven, with only 4 secs between them, and 9 secs behind the winners. After last weeks win at Upper Thames by only a second, the strengthened J15 girls quad of Georgia Brown, Hanna Hills, Amber Weller, Hazel Drury and cox Ella Nolson, won by 25 secs, beating 10 other boats.

Once again Henley Rowing club has continued the momentum generated in October, into November – with wins across all divisions. The club remains a force to be reckoned with for the rest of the season and looks forward to supporting the town’s rowing community – keeping it at the forefront of the UK’s rowing scene.

The Junior Sculling Regatta (JSR) was held The May Bank Holiday Monday following National Schools Regatta at Dorney Lake over a 2000m course. Some…