Henley Rowing Club Juniors will top the medal table with 8 Golds 5 Silvers and a Bronze medal.  The regatta is run over three days with events on each day being run from time trial, semi-finals and through to Finals. It was a glorious weekend of racing with over 24 degrees heat and only a slight headwind. Friday saw the first medals with the WJ15 ‘B’ quad of Jess Roberts, Phoebe Snowden, Natalie Cooper, Hazel Drury and cox Charles Washbourn, winning silver. Next the WJ15A quad of Georgia Brown, Amber Weller, Carla Russell, Hanna Hills and Cox Freya Reid won gold, after a race where the lead changed hands several times, but Henley’s last push with 500m to go sealed victory by half a length. Saturday saw the ‘A’ crew then jump into a coxed four, where they overcame 19 other crews to take silver. The ‘B’ crew then subbed in Amy Howard for Natalie Cooper, to make up a J16 8+ with Caoimhe O’Donohue, Amelia Crick, Phoebe Fletcher and Sophia Hahn, where they gave one of the most exiting races of the day to snatch a bronze medal in the last ten strokes of the race.

On Saturday there was the flagship eights events across all ages from 15 to 18. Henley had eights in the girls J16 event, Girls 2nd Eights and the top event Girls championship eights. The girls 2nd eights and Champ eights are run as a combined event so the Henley 2nd eight of Amy Sotnick, Rebecca Lister, Tilly Lock, Alicia Redman, Phyllis Barter, Grace Johnson, Alice Jones, Issy Jonsson, cox Charle Washbourne despite having to race against the 1st eights of other clubs the girls progressed through the time trial and semis to find themselves in the A final of Championship Eights. The Championship eight of Lottie Orr, Lauren kay, Georgie Robinson Ranger, Mary Wright, Clare Pearson, Daisy Butterworth, Ella Morgan, cox Freya Reid won the time trial and had a comfortable semi-final. The final saw them drawn next to Headington School, winners for the last 8 years. Headington lead off the start but by 800 metres  the crews where level and at 1250m it looked as though Henley where starting to pull away.  For the next 500m the crews where neck and neck but in the last 250m Headington pulled out into the lead to take the win by just over a second. Despite the conditions not being favourable the quality of these crews was such that they both broke the record set in 1994 by Lady Eleanor Holles School.

Sunday saw the girls from the eights split into smaller boats. Amy Sotnick and Rebecca Lister doing Championship pairs and despite a significant size disadvantage the girls finished in the middle of the time trial and progressed to the C final where they finished fourth. Alicia Redman, Alice Jones, Grace Jonsson and Phyllis Barter, competed in the girls quad sculls for 2nd boats. The girls won the time trial comfortably by 8 secs and went on to win the final even more comfortably with a 13 sec win over Headington.

In Championship Girls quads, Georgie Robinson Ranger, Lauren Kay, Lottie Orr and Issy Jonsson, where third in the time trial, and in the semi final did enough to secure third place that would see them through to the A final. Headington where favourites going into this final and established an early lead which the Henley girls could not draw back, they however where a class above the rest of field and finished well ahead of the other 6 boats in this 8 boat final.

Most probably still the flagship event for girls on Sunday is the Championship Girls Coxless Fours.

Representing Henley in this event where Ella Morgan, Mary Wright, Clare Pearson and Georgia Edwards. For this event Henley where clear favourites and showed their class by winning the time trial and semi without being stressed. In the final they established an early lead and built on this and with 500 to go had over two lengths lead, from here they just did enough to stay ahead of the intense battle for second place taking place between Lady Eleanor Holles and Becket School.

This year in particular, Henley Rowing club’s junior boys squad set out some impressive credentials as a centre of excellence for boys sculling.

The squads tally of four gold medals in sculling events was not matched or bettered by any other club or school in the UK . On the Friday the boys’ medal haul began in the J15 4x+ 1st boat event. Henley’s crew of Alex Carr, Grant Taylor, Euan Turnell , James Swinburn, cox Charles Washbourn won their time trial, by a significant six seconds and went on to dominate their final from the off to win by two lengths from Latymer Upper School and Aberdeen School Rowing Association.

Their squad mates in J15 4x+ 2nd boats of James Wallace, Ed Roy, Dan Crick, Sam Beattie, cox Tom McLellan matched this achievement. Although third in their time trial, they won their semi, and went on to take gold in the final rowing through with power and control from second to pass early leaders, Latymer Upper School, with Claires Court School in bronze medal position. 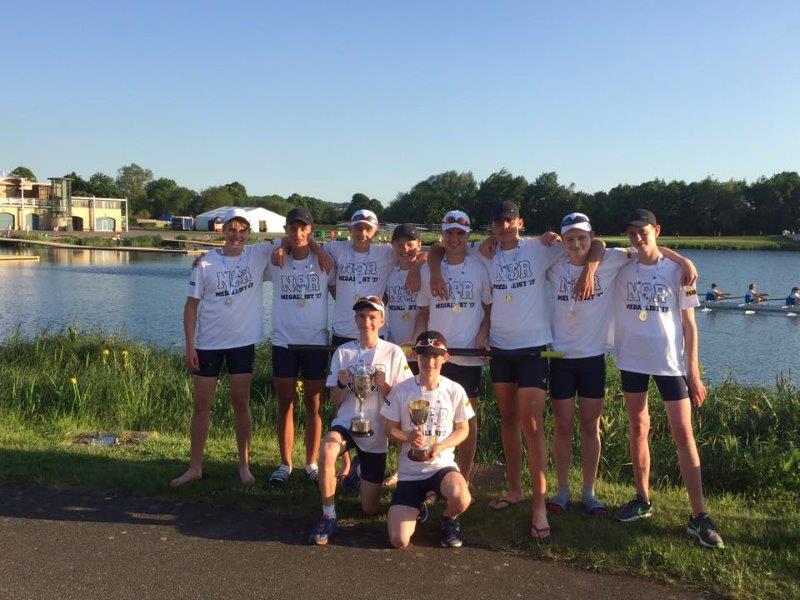 Remarkably on the Sunday, Henley manage to repeat its domination of Friday in the J15 quad events, this time in J16 quads. In the J16 4x event for 1st boats, Oliver Taylor, Grant Taylor, Euan Turnell, and Balthasar Issa caused a surprise by winning the time trial by the narrowest margin of 0.1 of a second from favourites, Globe Rowing club. Indeed the top four crews in the trial were covered by only 3 seconds. Some tight racing was in prospect and so it eventually proved.

In the semi, Henley moved through early leaders City of Bristol to take the lead by 500m gone. They then moved out to a commanding lead of 2 lengths by 1000m . At this point the live commentator pointed out the accuracy of Henley’s catch and said that

” if people want to watch some good sculling ability, let’s have a look at Henley” .

The crew came home comfortably ahead of the chasing pack. The final brought a sudden return to a headwind from the earlier calm. Henley were drawn beside a strong Globe crew, winners at the Junior Sculling Regatta, two weeks earlier. Again Henley took the lead by 500, extending to nearly a length from Globe, Tideway Scullers and City of Bristol. But Globe maintained an overlap up the course and in the last 250 metres started to gain. It became a fight to the line with both crews winding up their ratings. In a breathless finish Henley hung on to win gold by a few feet.

Again the 1st boat’s squad mates matched that performance. In the J16 4x 2nd boat event, Joe Sedgwick, John Yolland, Ed Roy, and Alex Carr won their time trial by a useful 5 seconds from City of Bristol and Marlow. In a straight final, Henley refused to be flustered by City of Bristol taking an early lead. Sculling strongly with composure, they steadily reeled their opponents in, passing them by 1000 and then extending their lead to 2 lengths by the finish with City of Bristol second and Marlow third. 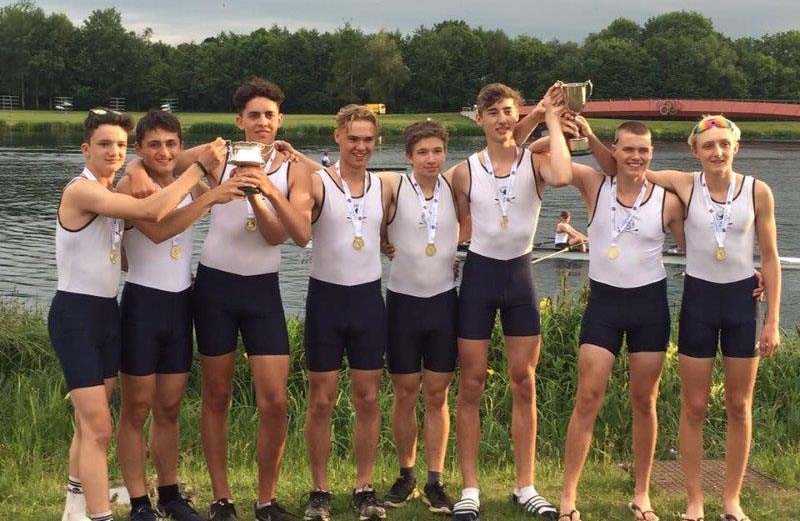 Summer camps will be held for Juniors 11 – 13 years of age, during the following weeks: Monday 27th  to Friday 31st July…