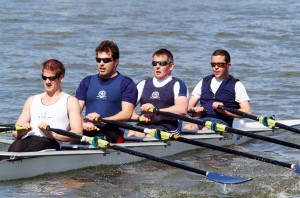 The Henley Rowing Club Masters were out in force at the Abingdon Head on April 12th along with just under 400 other crews. Two crews entered the 2km event which is one of the last Head races of the season. The Mixed Masters C Eight included: Jiri Rasek, Sally Robson, Jenny Parr, Bill Adamson, Steve Slaughter, Rob Berrington, Fiona Yates and Christine Lewis with cox Susanna Venn. The crew completed the course in 8 minutes 37 seconds, which comfortably placed them within the top 100 fastest times of the day in testing conditions. This was a result which challenged several of the IM3 Eights competing.

HRC also entered a Masters B Quad of Paul Crooke, Jeremy Sedgwick, Lucas Jones and Alastair Harsant. Crooke, competing for the first time in the bow seat, steered an excellent line contributing to the crew completing the course in 8 minutes and 21 seconds and earning the 57th fastest time of the day.

Both crews exceeded expectations given their collective racing experience and the blustery conditions at Abingdon. See our Masters page for more information about the squad.