Twelve junior crews from Henley contributed significantly to Thames Upriver’s victory at the Junior Inter-Regional Regatta, Nottingham on 25th April. Racing over 1500m and competing against 11 other regions from across the UK Thames Upriver region took the Boys and Girls cups as well as the overall Victor Ludorum trophy for the third year running.

The Junior Boys J14 double of Henry Peters and Tom Crook raced well taking bronze position. Tom had also won the regional trial to represent Upriver in the single, but opted to race in the double.

The Junior Boys J15 coxed four of Jack Broadbent, Cameron Jones, Bruce Turnell and Joe Zolkwer, coxed by Lachlan Reid, took a commanding victory in their heat winning by a margin of 25 seconds. They went into the final knowing that their closest opposition would be the boat from the Thames London region and battled with them for the entire 1500mm, finishing well and winning silver.

The boys then joined four J16 boys from City of Oxford rowing club for the J16 eights. Despite having had only one training session together the crew produced a fantastic finish in their heat to qualify for the A final ahead of the Shrewsbury school crew. The race for silver and bronze in the A final was the most exciting finish of the day’s racing. This was hotly competed between four crews and in the last 250m the Henley/Oxford crew came through from 5th to take bronze, just missing out on silver. 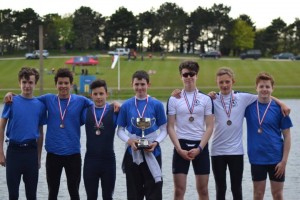 This was a great performance by the junior boys against some more established and older crews from other regions.

Lottie Orr won the WJ15 single by a nine second margin and was back in action soon after with Georgie Robinson–Ranger in the double. Following a good start they dominated the field and won a comfortable victory.

The WJ15 coxed quad of Tilly Lock, Mary Wright, Grace Johnson, Izzie Jonsson, coxed by Rebecca Lister qualified for the final with the fastest time of the heats taking gold after an exciting finish.

Alice Jones, Charlotte Moss, Eve Poulter, Ruby Brown, and Freya Reid had a comfortable victory in the WJ15 coxed fours. They qualified to the final with the fastest time from the heats, and after an excellent start steadily drew away from the other crews to establish a comfortable winning margin.

The WJ16 coxless quad of Florence Wiggins, Clare Pearson, Lily Simpson and Georgia Edwards qualified as the second fastest crew for the final with a victory of 20 seconds over the second place crew in their heat. Racing next to Nottingham Rowing Club, the fastest qualifiers, the crew got off to a good start, eventually taking a lead of clear water at around the half way point. By the end of the race they had extended their lead to two lengths of clear water to take the gold medal.

The WJ16 eight comprised the four girls in the WJ16 quad plus Lauren Kay, Ella Morgan, Iona McNab and Maisie Turner, with cox Emma Lister. The girls performed well in their heat taking a victory of around two lengths, however, due to a timekeeping error the two heats were declared void. The races were re-run later in the day with times from both heats being used to establish the medal positions. The Henley crew won the first of the two races in a time of 5 minutes 34 seconds, and after a nervous wait for the results from the second race, collected their gold medals.

Lauren Kay represented the Region in the WJ16 singles, and after qualifying as third fastest and less than a second behind the second faster qualifier, had to jump out of the eight after its first heat and into her single scull for the singles final. As a result of some delays to the morning race programme caused by the strong wind, Lauren’s final started less than half an hour after the eights race finished and she crossed the line in fifth place after a brave race.
Maisie Turner, Anna Roe, Alicia Redman, and Katy Claridge finished second in their heat of the WJ16 coxless fours and were fourth fastest qualifiers in a tight field. The final was a very close race, with the Henley crew just in second place at 500m. Coming into the final 250m the crews were battling for silver and bronze and the Henley crew just missed out on a medal in the fight to the line.

The WJ16 double of Iona McNab and Ella Morgan won the silver medal for the Region, crossing the line in a time of seven minutes and eight seconds, just one second behind the winners from the Eastern region. The race between these two crews was close from the start, and they quickly left the rest of the field behind them. Coming into the finish Henley gained an overlap to secure the silver medal.

This is a strong start to the regatta season indicates that the junior section are in good form and should be competing for honours at the larger National events over the next few months.