Henley RC was founded ante 1839 and is probably the oldest Open Rowing Club in England.

We believe that the club was formed in 1830, the year after the first Oxford and Cambridge Boat Race was held at Henley. This was because the towns folk became interested in the sport of rowing. Club’s in those days, were formed by the members of “Gentlemen’s Committee Rooms” who met at local inns. We had our Committee Rooms at one of several local inns. The Bridge, The Angel and The Carpenters Arms and we hired our boats from the local Boatmen.

Henley Rowing Club competed in the local rowing events. The Club took part in the first Henley Regatta, now the Royal Regatta, in 1839, when we won the “Town Challenge Cup,” rowing in a boat called “The Wave.” We won this event no less than 23 times prior to 1884, when it moved to the Town & Visitor’s Regatta. The Club has also won The District Pairs twice and the local Amateur Sculls 9 times until they ceased to be raced at the Royal Regatta. The picture shows members of Henley Rowing Club who took part in an event celebrating the 150th Anniversary of Henley Royal Regatta in June 1989 by recreating the first race for the “Town Cup.”

The Club was always trying to resolve the boathouse problem and in 1888 they hired space in the Red Lion Hotel Boathouse, which is now Century Galleries in Riverside North. A local firm , Messrs. T. Shepherd and Dee, had a thriving boat building business there in the 300ft long building. They made pairs and sculls for Local Rowing Clubs and also exported boats to Germany, Holland and South America. By 1896, the Club had a membership of over 50 with at least half of them active oarsmen. The Club met at The Red Lion and Mr. W.F.D. Smith MP was our President. Times were still hard because in 1900, although the Club owned boats, we owed over two years back rent, for boat storage to Hobbs amounting to £47. This caused the Committee considerable concern and they decided a solution had to be found.

Henley Rowing Club has been closely associated with Henley’s Brakspear’s Brewery. In 1903, Brakspear and Sons, in order to resolve both the money and storage problems, offered to provide part of the Brewery premises, the stables at the corner of New Street and Riverside North, as a boathouse at a nominal rent. The Little White Hart became the Clubs “Headquarters” and we lived there until 1986 with the stables for boat storage and the hayloft as changing rooms. Boats had to be carried across the road to reach the river with someone directing traffic on the corner.

On more than one occasion cars failed to stop but we always managed to make room for them to pass underneath! Weight training was in an upstairs back room which had a timber floor until the Brewery converted the room below to a kitchen for one of their staff. We were then moved to the Brewery’s coal cellar! In difficult times Brakspear’s have forgone the rent and are still Patrons of the Club. 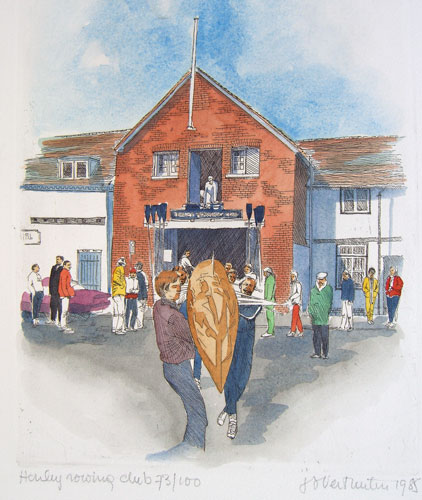 1946 was a further milestone in the Club’s history. Henley United Rowing Club, founded in 1886, “to provide facilities for working men and youths” and with a rented boathouse between the Little White Hart and the Brewery stables, amalgamated with Henley Rowing Club. This provided additional boats and members and the enlarged Club prospered.

Women’s rowing took some time to get going at HRC (about 125 years in fact). Our first women’s pot was, we believe novice fours at Lea Autumn Regatta in 1976. The Club now has a successful women’s section with female members at both senior and junior levels having represented both England , Wales and Great Britain over many years. The junior girls won the inaugural Diamond Jubilee Challenge Cup at Henley Royal Regatta in 2012 and are consistent winners at Henley Women’s Regatta and the National Junior Championships. 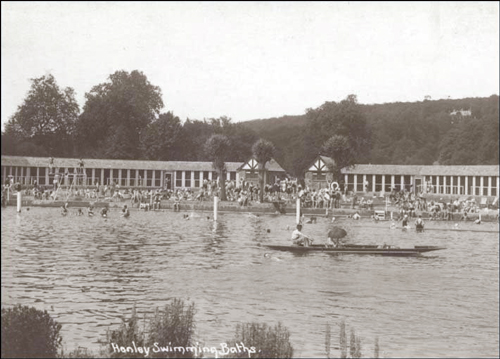 In 1979 the Club was still lacking it,s own Boathouse and clubroom The Henley Town Council leased a portion of the old swimming baths site to the Club and building work started. The Club moved into its own Boathouse , on the 1st June 1986, when the new clubhouse was opened by Thomas Keller, President of F.I.S.A. Subsequently the Town Council have granted a lease for the whole of the swimming baths site and with grants from the Town Council, The Lottery and The Foundation for the Sports and The Arts further developments of the site has taken place to provide better facilities in particular to accommodate the increase in junior rowing which thrives at the Club. 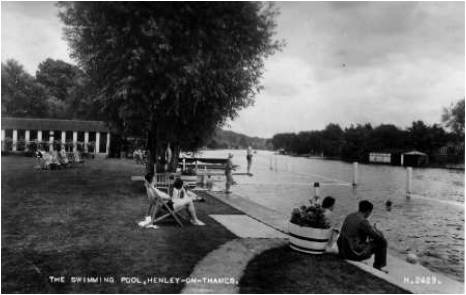 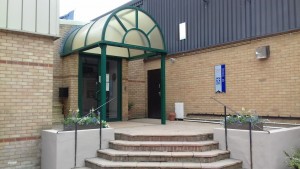 Entrance to the new premises

The Club now has over 350 members and continues to be successful locally, nationally and internationally. The Club’s annual total of wins repeatedly puts as one of the top Clubs in the Country. In 2005 the Club recorded its first open win at Henley Royal Regatta when it won the Thames Cup. Juniors have also been successful at Henley Royal Regatta with two Fawley Cup wins (as composites in 2005 and 2007) and the inaugural Junior Women’s Quad Scull event in 2012.

The club is pleased to record the names of past Presidents and Captains on honours boards. 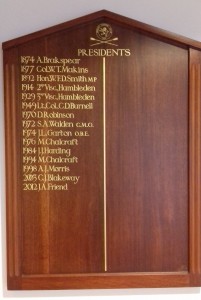 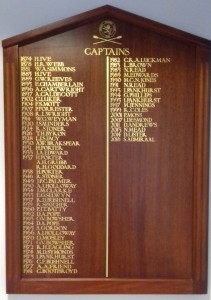